Paf has openly published its players’ annual wins and losses, a unique initiative in the gaming industry. Paf will go further too – by removing all big players and stopping direct marketing to risk players.

Paf has become a pioneer in the gaming industry through its openness. Paf now openly publishes its figures for the wins and losses for all players over the past two years. It’s a unique initiative in an otherwise very secretive industry. Paf’s CEO Christer Fahlstedt calls on other gaming companies to follow suit.

“We are probably the first gaming company in the world to show openly and transparently what our customer database looks like. These are the figures that most gaming companies want to hide because it shows that a few individuals can have an enormous impact on their operating results,” says Christer Fahlstedt. 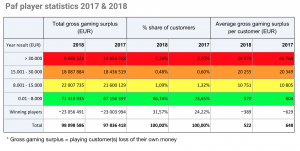 “We need a genuine debate. By being transparent we want to highlight this issue, which is absolutely crucial for the future of the industry. We urge our colleagues in the gaming industry to share their corresponding figures,” adds Christer Fahlstedt.

Over €4m in reduced revenue

Last year Paf introduced a permanent yearly limit that applies to all customers who play the company’s online games. Paf is the only international gaming company to introduce such a ‘loss limit’. The annual maximum yearly limit of €30,000 has been gradually rolled out since September 2018.

“The figures show that the ‘loss limit’ and our tougher measures in gambling responsibility mean that we have lost over €4m in revenue annually from our big players. It is a lot of money. But it is unsustainable money that we no longer receive and which the whole gaming industry should say no to,” says Christer Fahlstedt.

At the same time as the figures show reduced revenues from big players, the number of active customers at Paf has grown by 24 percent over the past year.

“Our reduced revenues are entirely driven by a sharp reduction in the big players’ losses, but at the same time we have increased the number of players who play for smaller amounts. It is something we are proud of and it shows that our actions have had a concrete effect,” says Christer Fahlstedt.

“The statistics also show that almost a third of our players ended the year in profit and this is often forgotten. It reveals why so many people like to play for money,” adds Christer Fahlstedt.

Due to the yearly limit Paf can promise that the company will completely stop big players from playing online at Paf by 2020.

“We can guarantee that Paf won’t have any ‘high roller’ revenue by 2020 – since the ‘loss limit’ will be fully implemented then. I can also promise that we will continue to report with complete transparency on the revenues from our various customer groups, ”says Christer Fahlstedt.

No direct marketing to risk players

Paf will further increase the level of responsible gaming in 2019. The company’s gaming radar has been developed to enable faster and better detection of worrying gaming behaviour. This means that in the future Paf will be able to stop all direct marketing to gaming customers as they start to appear in the lower risk zones.

“Previously we did not send direct marketing to players who play for large amounts and who have been flagged for a responsible gaming reason. Now we are expanding our restrictions to more customer segments, which in practice means that we will double the amount of customers who do not receive direct marketing offers from us,” says Paf’s Deputy CEO Daniela Johansson.